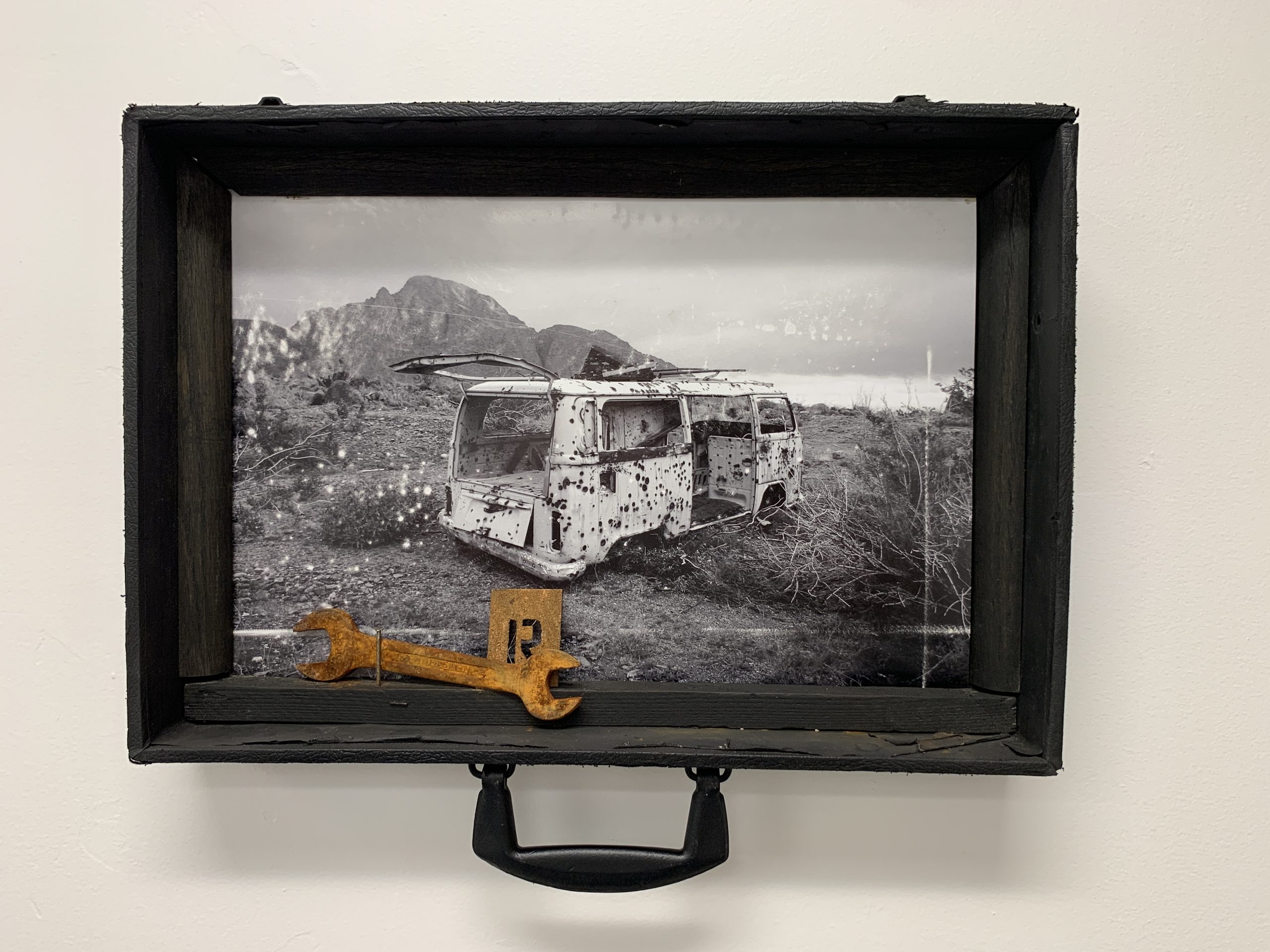 Matt Cauthron has been  collecting and re-configuring mundane objects –some might call  them junk — most  of his life. “My grandfather was always giving me scraps, nails, a hammer, things like that, and I remember using them to make this weird stuff.” In college, he took a photography course, but wasn’t satisfied with traditional pictures suitable for framing. “I have a natural tendency to combine materials, and art for me became a way of doing it.”

Now he is an established and prolific artist, photographer and educator in his Coachella Valley home. His richly varied work includes film and digital photography, mixed media, graphic design, and video. But a key element is his lifetime love of assemblage, combining rustic materials, found woods and metals as well as photographic takes on artifacts in the desert landscape in line with his offbeat vision. He has a hashtag for this work: Desert Funky. In line with it, he seeks out “weird, forgotten places in the desert I find unique.”

“Imperfection,” a selection of his works, is now on exhibit at the CREATE Center for the Arts through Oct. 9, with a reception scheduled there from 6 to 8 p.m. Friday, Sept 24. His aesthetic at times combines a personalized chronicle of lonely, eccentric desert life and examples of others’ response to it as well. An old motel sign surviving on an otherwise abandoned site seems to boast a pool; Cauthron calls it “No Pool.”

Even more striking is what appears to be a rusted, badly scraped but decorated bus of some sort, maybe a school bus, its rear turned upwards into the air, its nose planted into the sand–as if the bus somehow flew and then dove into the desert. He found that in what he calls a car forest in Goldfield, Nevada. “Some weird person collected 30 vehicles or so, buried them in te dirt, spray-painted them and then left them out there for people to see.”

One thing his work tends NOT to be: prettified or glamorous.  “There’s a desert that’s a contrast to the one of the tourism industry, the old school Palm Springs of pool parties and vacation homes. There’s another reality to people who are locals.”

The CREATE exhibit includes some two dozen works, among them traditional black and white prints, mixed media and assembled objects recovered since late 2020. “It’s a kind of investigation into techniques I forgot that I employed,” he said. “I’d gotten caught up in digital work and Photoshop over the past 20 years. But I went back to some raw materials, stick stains and weeds. I use a lot of coffee and linseed oil and rust,” hoping “to breathe that desert funkiness into the material.”

He grew up in Upland where skateboarding and punk rock were more his concerns than fined art. But his work and career glow with the virtues of being a different drummer.  He is  an Apple Distinguished Educator, an Adobe Education Leader, and co-founder of the Digital Arts Technology Academy. He has worked with Apple, Adobe, the California Department of Education and the California Arts Project to assist other arts educators, develop model practices, and develop the current California Arts Standards for Media Arts.“Imperfection” is a layered term suggesting all sorts of relative values and subjective implications explored in his work — is the desert lonesome and desolate, or does it boast its own take on beauty? Cauthron is easygoing, accessible and modest, and he wouldn’t likely suggest it: But he’d be more than deserving to label it tongue in cheek as well.